Continuity is when the grouping of one set of elements easily associates to another. In essence, the eye moves through one element group and into another. The eye takes the path of least resistance. In the figure below left, the eyes will most likely see two X’s grouped together. This is the easiest path for the brain to make sense of because there is little discrimination required for the interpretations. If instead, one focuses on the apex of the angle, they will perceive a chevron, or they may perceive a diamond if they focus in the middle of the form.

In the second graphic, we see a line diverge into two paths. The line creating the least change in the path is the one perceived as being strongest. The path diverging from the norm is the one with the least influence. In this instance, the brain will let the eye follow from the curve in yellow, through to the orange, as opposed to continuing to the straight yellow segment. Continuity occurs easiest along curved or straight lines.

Continuity can also be demonstrated as extending lines that don’t exist, or implied lines. Since the brain wants to continue in the path of least resistance, it may fill in where nothing appears to complete an implied line (a form of closure). Continuity is seen in logo graphics like the one below where the crossbar of the H continues out to the leaf shape. 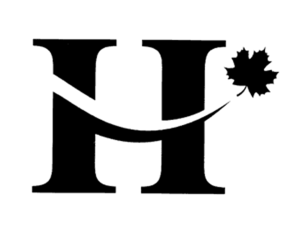 The Principle of Prägnanz says that when presented with visual information, the brain will attempt to organize ambiguous information into the simplest form possible. What this is saying is that the brain will process the visual information received into as symmetrical  an image as possible, composed of the simplest shapes possible, and using the least number of shapes possible. So, since the brain’s initial reading of a confused or complex image will be the least complicated possible, any following readings will attempt to deconstruct more complex structures within the frame.

The first illustration in the Continuity discussion above demonstrates this well.  In that instance we see 2 X’s in the initial reading (or maybe a diamond or chevrons) but it is harder to process the whole of the design all in one glance.

The fact that the brain attempts to organize into the simplest shape possible is demonstrated below. 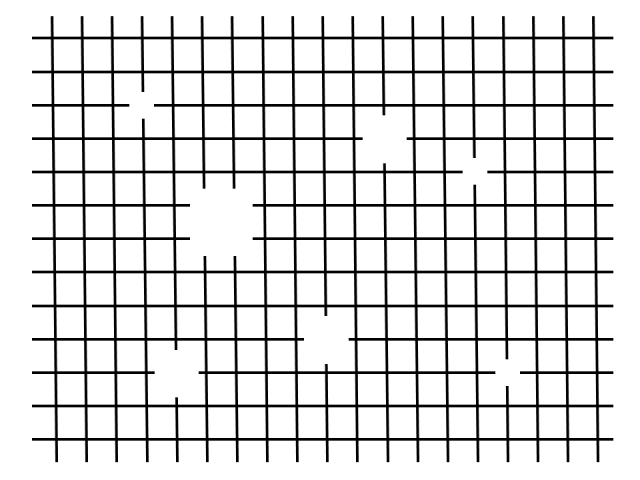 The image shows what appear to be mostly white circles within a black grid pattern. One, the largest white form, takes on more of a square shape. In reality, all of the shapes were made from placing white squares over the grid. Because the smaller shapes do not provide enough information to the brain, it sees them as circles. Circles are a simpler shape than squares. In the case of the largest shape, we see a square because it crosses more than one line in each direction. This provides the brain with more information allowing it to create the more complex square shape. 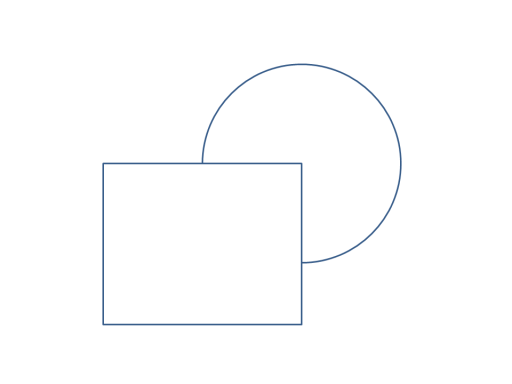 Another example is the one above. Prägnanz states that the simplest reading is that a circle is positioned behind a square as seen in the first position below, regardless if that were the case in reality. Without Prägnanz we might instead initially perceive the second or third readings below.

Prägnanz goes a long way in explaining the numerous sighting of the vestige of the Virgin or other religious icons in out of the way places like someone’s bathroom window, or the image of a human face on the surface of Mars. Again, we find the brain trying to resolve what it sees into something logical and familiar. A bit more discussion on this can be found by looking up Pareidolia which is a form of Apophenia.

Now that we have covered the principles of Gestalt Perception, it is necessary to point out that these principles do not often occur in isolation. One will not usually exist by itself but in conjunction with one or more of the other principles. Note also that there will be times when the principles do not manifest themselves at all in a given work.

As Richard Zakia states in his book, “Perception and Imaging”

“You must not… think of [gestalt principles] as separate, for they are related and work together to facilitate seeing. Visual elements that are close together, that are similar, that form a smooth contour and that allow for closure can produce effective composition.

“Keep in mind, however, that many excellent pictures have been taken that do not conform to the Gestalt [principles] of perceptual organization. Examples of such pictures are those with strong emotional appeal and those that delve into the unconscious. “

Also remember that Gestalt is not considered completely scientific. It tells us what happens, but it doesn’t tell why or how it happens. Research has shown that the elements above happen across a broad population so they can be assumed as reputable guides. Their importance may not be so obvious at this moment, but once we cover the next two major sections, the Elements of Design and the Principles of Art, Gestalt’s  resultant influence  will become obvious. Simply put, the principles of Gestalt help explain why the  Elements of Design and the Principles of Art were able to be developed in the first place. Gestalt is an underpinning of most historical two-dimensional art and the rational basis of much of what has been taught in art school over the past few centuries.

Next time: Elements of Design – Line

Lens, Light and Composition is presented in a structured form with occasional asides. It is not a semi-random presentation of information. To get the greatest benefit from this blog it is advised that you start at the beginning of the table of contents, and work your way down from there. Thanks for reading.